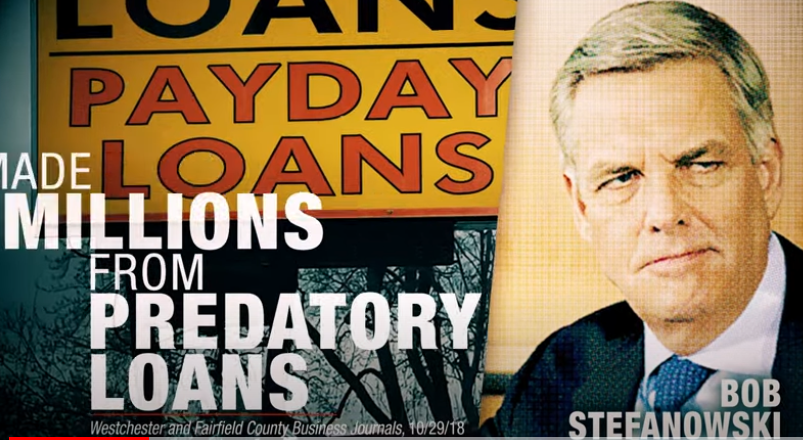 A super PAC funded by the Democratic Governors Association launched a television campaign on Wednesday to remind voters of Republican Bob Stefanowski’s former role as chief executive of a payday loan company whose high-interest loans are illegal in Connecticut.

“What do you really know about Bob Stefanowski? asks a narrator at the opening of an advertising spot for Stronger CT, a committee registered two weeks ago by the DGA. “He made millions running a payday loan company that charged workers up to 450% interest.”

With an initial outlay of $408,468, the DGA began returning some of the fire directed at Gov. Ned Lamont by the CT Truth PAC, which spent nearly $1.6 million attacking the Democrat. Another super PAC has made a $200,000 deposit on a promised million-dollar campaign against Lamont.

“I think we are heading more and more towards a campaign season. I see a lot of PAC spending coming from the other side,” Lamont said. “So I think we’ll be here to talk about what I think is a pretty good record for the state – where we were four years ago, where we are today and where we want to be four years from now. “

Stefanowski, who hasn’t started regularly posting a campaign calendar, was unavailable but his campaign quickly released a statement that ignored the content of the new ad and stuck to what has been a theme. campaign constant: Lamont and other Democrats are to blame. for inflation.

“We know Ned Lamont is stuck on the same old, tired policies, and his big-money super PAC friends will say and do whatever they want to keep him in power,” said Liz Kurantowicz, an adviser. “We’re running a different campaign with new ideas as Ned Lamont and the Democrats in Washington, D.C. lead us back to inflation we haven’t seen in 40 years and the same status quo that’s costing families and businesses thousands and thousands of dollars.”

The US Department of Labor reported on Wednesday that inflation hit 9.1% in June, a measure of rising costs over the previous 12 months. The year-on-year inflation rate in May was 8.6%.

Lamont noted that commodity prices have fallen in recent weeks after rising dramatically following the Russian invasion of Ukraine, a potential harbinger of lower prices. The Wall Street Journal reported that some retailers are planning steep discounts to shed inventory in the event of a recession.

But the governor acknowledged that inflation was putting pressure on consumers to budget for their households.

“Inflation smacks people,” Lamont said. “All I’m trying to say, you look at grains and you look at soybeans and you look at oil and you look at these wholesale prices, they’re down, say, 10% over the last few weeks. It will reflect. But in the meantime, I have to do everything I can to help people. That was what these tax cuts and rebates were for.”

At Lamont’s request, the legislature acted in late March to suspend the state’s 25-cent-per-gallon excise tax on gasoline from April 1 through November 30. The current budget also provided relief through, among other things, a $250 child tax credit. , a higher property tax credit, lower vehicle taxes in 75 communities and free bus tickets.

Stefanowski called on Lamont to use more of the state’s budget surplus for immediate tax relief, rather than paying down debt and setting aside money for a possible recession that could result from efforts to the Federal Reserve to cool the economy with higher interest rates.

There is no threat of a recession on campaign spending.

Stefanowski has deposited $10 million of his own fortune into his campaign account, and his campaign has already spent at least $4.25 million, according to documents filed this week. It also raised $1.1 million from other donors, including $508,759 in the financial quarter ending June 30.

Lamont, who spent $15 million in 2018 and has already personally spent $6.3 million for his re-election, hardly needs the financial support of the DGA. But outside groups have a freer hand to launch attacks that don’t necessarily trickle down to the candidates they’re trying to help.

By law, groups like Stronger CT and CT Truth PAC operate independently of campaigns and are solely responsible for the content of their advertisements.

Stronger CT’s funds come from the DGA, whose donors include large corporations and individuals.

Lamont spoke to reporters on Wednesday after appearing with Hartford Mayor Luke Bronin and community leaders at the site of a competitive grant-winning residential and commercial development on the northern outskirts of downtown. of the State Department of Economic and Community Development.

The governor campaigned largely through official daily events publicizing his administration’s priorities and programs, a perk of the incumbent. The practice is not without risk, as it exposes Lamont to daily interrogations from the press.

Stefanowski has yet to regularly share his campaign schedule, though he has held at least four press conferences since accepting GOP endorsement in May and sat down for an in-depth interview with CT Mirror. . He has scheduled a press briefing for Thursday.

The Stronger CT ad was largely a cover of the biggest Democratic hits directed at Stefanowski in 2018, when he was also the GOP gubernatorial candidate.

Stefanowski’s role in running a payday loan company, DFC Global, until 2017 was an issue in 2018, as was his proposal to try to eliminate state income tax without increase other taxes. Half of the new ad is a repeat of arguments made by Democrats in 2018: that Stefanowski’s tax plan would devastate state services.

Newton also launched a line of attack not featured in the current ad: who are the clients that helped Stefanowski more than triple his personal campaign spending from his efforts in 2018, when he used $3 million of its own funds?

“What else does he have to hide?” says Newton.

Stefanowski has promised to disclose his tax returns but not necessarily the identity of his clients, some of whom are foreigners. Stefanowski said most, if not all, of his consulting work was covered by nondisclosure agreements.

The Democratic Governors Association played a minimal role in Connecticut’s open gubernatorial race in 2018, but the DGA generally plays a more active role in protecting incumbents.

“I think they support the team,” Lamont said. “And I’m part of the team.”

The governor told reporters after a late morning public event that he was generally aware something was afoot, but not the specifics.

The PAC had acted on Tuesday to reserve television time, according to public documents filed with the FCC. He reported his initial expenses Wednesday afternoon to the state Elections Compliance Commission.